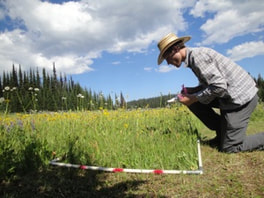 ​Landscape connectivity and biodiversity conservation
Stakeholders across Canada are collaborating to help meet Canada's biodiversity goals and targets.  Among the many challenges they face are uncertainties about landscape connectivity - the degree to which the landscape facilitates or impedes the movement of organisms (Taylor et al. 1993), and about how landscape connectivity influences the distribution and persistence of biodiversity, including its taxonomic, functional, and phylogenetic components.  Uncertainties persist in part because of methodological inconsistencies among field studies, logistical constraints limiting study replication at relevant scales, and because core aspects of connectivity (i.e. dispersal, habitat affinities) remain a "black box" for the vast majority of organisms, including invertebrates, plants, and microbes (many of which play important roles in ecosystem functioning).  Our lab aims to fill some of these knowledge gaps.  Example projects in the works include: (i) conducting a critical review of how connectivity estimates are validated in practice; (ii) using spatially-explicit simulations to explore the strengths and weaknesses of different study designs for evaluating landscape connectivity (including landscape-scale experimental studies such as  Pither & Taylor); (iii) examining concordance between connectivity hotspots for terrestrial vertebrates and vascular plants in Canada; and (iv) generating predictive models of potential landscape/biogeographic connectivity for ectomycorrhizal fungi, which are important symbionts of dominant tree species in the mixed-temperate and boreal forests of Canada (see more on this below).

Historical and regional influences over local diversity
More generally, we are interested in how historical and regional-scale processes, including dispersal and species pool contingencies,  influence diversity at local scales.  We explore this in a variety of ecosystems, including B.C. forests, alpine meadows, and freshwater lakes, using a combination of field observations, experiments, and simulations, including agent-based models.  Using province-wide forest survey data, for example, we are discovering that beta diversity within forest types is simultaneously positively influenced by the size of the habitat-specific species pool and by the diversity of forest types in the surrounding region.
​
Photo to right: former MSc student David Ensing surveying alpine meadow vegetation.

Historical/biogeographical perspectives on associations between plants and mycorrhizal fungi
By moderating key processes such as nutrient cycling and seedling recruitment, mycorrhizal fungi (MF) have profound impacts on the structure and functioning of plant communities and ecosystems.  In collaboration with Dr. Brian Pickles (U. Reading in the U.K.) and members of our local "MF hub" Drs. Miranda Hart, John Klironomos, and Melanie Jones, our lab brings a historical / biogeographical perspective to understanding plant-MF associations.  A key impediment is severely biased and inadequate sampling of MF habitat, as we documented in a New Phytologist article.  We then propose in a mini-review article in FEMS Microbiology Ecology that some MF propagules could conceivably remain viable after centuries or millenia... what we call the "Paleosymbiosis hypothesis".  If correct, this would have important implications for our understanding of the origins diversity patterns among MF.  More recently, we showed in New Phytologist that a significant amount of the variation in the rates of post-glacial range expansion among North American tree genera can be explained by (a) the diversity of MF taxa with which the host associates, and (b) seed size (bottom right figure).  These latter findings offer novel evidence in support of the hypothesis that range expansion among MF hosts is more likely to be facilitated among generalist hosts.  Of course, we know very little about the "fungal range" (niche breadth) of most host plant species, and likewise, about the "host range" of most fungal species. This hinders our ability to predict how the structure and functioning of forest ecosystems will change in response to rapid global change.  BLERF member Corrina Thomsen is exploring biogeographic hypotheses for variation in fungal range among ECM hosts for her dissertation.
​

Invasive species ecology and biocontrol
We collaborate regularly with the provincial and federal governments on research addressing invasive plants and biocontrol.  We are interested in understanding how changing climate could impact biocontrol efforts for exotic invasive plants such as spotted knapweed.  Former MSc student Liana Collette substantially expanded the occurrence record database for Russian olive in BC using Google StreetView (see centre image below), and published 3 papers on this invasive but admittedly attractive tree (preliminary niche model in bottom-right picture).  Recent MSc graduate Brian Muselle used an agent-based model to explore the dynamics and potential management strategies associated with the impending invasion of the apple maggot in the Okanagan valley - see his citizen science page here.  We continue to be interested in the impact that invasive species are having on ecosystems in BC, particularly the endangered antelope-brush ecosystem of southern BC.  Former M.Sc. students Chandra Moffat (on the right in the left-hand picture above) and Dave Ensing became experts on invasive Pilosella hawkweeds in BC, and both are now Research Scientists with Agri-Food and Agriculture Canada, in nearby Summerland BC.  Former M.Sc. student Josie Symonds (centre of middle photo above, now with the provincial government) began this work.